"Which anniversary did you most dread," one marriage said to another.

Do you even remember the first one? It's the paper one. The modern gift-givers suggest we skip the paper and give a clock. Because what? Because for the first year we paid no attention to time. We slept late, we worked second and third shift, skipped church, learned to map each other from tip to toe by wasting hours and doing little else. My husband expected me to play alarm clock on Sunday mornings, which is why we missed so much church, and he'd count the good days as the ones I jumped him. We ate terribly at all hours and with not concern for health. Jamocha shakes, curly fries and shaved beef with Au Jous at Arby's. Fazolis when we ran out of money, because they gave us free bread sticks. On Friday nights, we took date night. We split cheap fajitas on Fridays at Don Pablos, rented a dollar classic from Family Video and split a pint of Ben and Jerry's. We made pillows of our flesh, rotund and protruding. 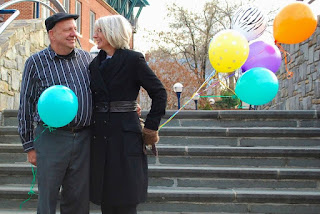 The first year, did you think it was the sweetest and hardest when you look back?

It took one year, just one, before we tiffed over the wakey-wakey protocols. After our daughter's birth, I refused to wake him up for church any more, and we had to go to church now, for a soul other than our own.

What habit had worn you down by the end of the first year? When did you start paying attention again to time? Was it with the bills, thirty days from one big one to the next? Or payday with a little splurge? Was it the miles until the grinding began, like the brakes on our Dodge Shadow, that American piece of crap we polished and cursed together, kicking the tires and hating Kmart's Service Department for the two-hundred fifty smackaroos they gauged from us. Finally Dad helped us grow up a bit by teaching us how to do the brakes ourselves for a tenth of the cost.

On our first anniversary, I could hardly sit up from the stitches across my bikini line, where one week earlier they'd extracted my organs, stacked them up, lifted out my daughter and put them all back in the right spot. It hurt to swallow the cheap Chinese we ate.

How did you feel on that paper anniversary? What ephemeral sentiments did you exchange? Do you remember? What did you do with me?

I was born by your first anniversary, a fact that would not dawn on me until I was nine or so. I would have liminal memories of those early years. Flickering TV's, illegal scents, a Fisher Price horse you gave me on Christmas Eve. I scooted around the dim twinkly room front room. I can't recall if I rolled fast on linoleum or worked hard to motor myself over the shag carpet. Later, when I calculated the timeline of my birth and your anniversary, I learned what it means to do the right thing. I understood some of the fractious shoutin' after hours. I understood you took the harder, righter way, for things bigger than yourselves.

I never dread anniversaries like people talk about dreading birthdays, but looking back, some were warmer, felt more like the exhilarating accomplishments that a tenth-thirteenth-sixteenth-eighteenth-twenty-first evokes. Mostly, those are on the fives, right? Sometime in our fifth year, another wife in my Bible study asked me to count wood under the covers, burned, spent, (wink, wink) you know. Thousands of fires set, burned, ebbed. How beautiful, but sometimes exhausting. And I had only one child in all that time. You had three. You found the quiet escapes and how much work it must have been.

I remember our fifth, when my husband gave me the first piece of expensive jewelry since our engagement. The waters on the Chicago canal sparkled beneath us. The gift -- either the sapphire and diamond cross I'm scared to wear, lest I lose it or the white gold braided bracelet that I think I ruined because I rolled it over my tiny fist rather than fight to re-clasp it around my wrist -- sparkled less than lights of the city. We'd parked our car on the first stop of the CTA train, dragged our luggage onto the train, exited at the Randolph Street main stop. We hefted our luggage blocks and blocks past homeless men asleep in corners under the passes. Our arms ached and I stung with worry that the valets saw how poor we were, having saved up for this getaway. When we collapsed in our room, I cried as I stared down from the twentieth floor of the Sheraton. We ate at the seafood restaurant you suggested, even though we were vegetarians who wouldn't eat meat anyway. We'd budgeted fifty bucks for the meal and it wasn't enough. My pride stung, but my husband took me back to the room and we danced again in the diamond lights twinkling.

On my tenth birthday, you said, "You made it to a decade. A whole decade. That's an accomplishment. Two digits now." No one could take those from me, I realized. The decade that mattered, that helped me make it so far so happily had happened behind the hollow panel door of your bedroom. It hid in waves of that crazy waterbed, the rocky-rolling years already tempering. Later in the year, you'd drain the bladder of the bed and for over a year, you'd share every corner of your life with all of us, like we lived on the prairie in a camper. I was cognizant enough to realize that you had no time alone but your need for such private moments, to that I stayed oblivious.

Was there an anniversary you dreaded, or anticipated? I remember my friend Mark saying you sneaked  off once for a celebration in a hotel and split a bottle of champagne. He said not to repeat that back to you, since you did not imbibe in front of your children. I thrilled to the idea that you'd paid for the pop and that your love spilled over like that still. For in the tiffs of your early years, I wanted nothing more than for you to make it. I needed you to make it.

We made it to year five in August, two months after you made it to twenty-five. None of us had enough money to splurge for you and yet we knew we owed those five years to you. How does one marriage repay another for its breath and life? We started saving then, all of the kids, squirreling off little bits for another ten years. What's thirty-five but middle-aged, coral, according to the traditional gifting list. Shell.  We'd learn between year five and year fifteen just how fragile marriages are. In our fifth year, three marriages of kids our age dissolved. When we married, you said, wait until year seven. Until then, you're just playing house. That's the year it gets real. By real, you meant hard.

In our fifth year, another of your children's marriage was born. And another the next year. The baby marriages kept coming

By the fifteenth anniversary, I'd witnessed the violent deaths of adult marriages. Like a case of Benjamin Button, I ask "how can something like this die like that?" Consider how we all feel when babies die. How have my friends survived the grief of still births, children who've died of cerebral palsy or in accidents? We acclimate ourselves to deaths of baby marriages and old people dying. But we question the loss of life in childhood and long marriage. This year, twenty years of marriage achieved, adultery and acrimony ganged up on a fifty-year old marriage. Ax-murdered it. When two, ten, fifteen year marriages died, my husband and I did health checks. How do we health check a fifty-year old one? Isn't there a stage where life is a given? No. The mystery of marriage is truly a mystery, a sacred thing, a secret, a sacrament, the centrality of who we become.

In A Grief Observed, Lewis writes that marriages that last to death does part often lead to marriages arrested, never ending but changed. Many widows and widowers still feel married. I imagine that even the widows and widowers who remarry have a closet identity, a person within still married to the deceased spouse.

Which anniversary do I dread most? That one. My mother-in-law faced that tenth this year.

As time passes, I accumulate clocks. Clocks tick and tock like a madness in my head and in my cells. I read clock faces that all have fragility behind their second-minute-hour times.  Fragility like a witching hour, bookends our lives. Our early marriages seem hail and healthy, like lively children, but children thrive with strong parents. Late marriages seem stalwart and strong, but time grinds us down. In our early years, your marriage took care of ours; in your late years, I hope to support it as an adult child honors her parents. It's a kind of herd health. Immunize my marriage, exercise it, support the healthy habits of marriages around me, and in turn, when the years of brittle bones and faltering flesh strain the capacity of joyous pleasures, find ways to celebrate your accomplishments. In twenty years, I want hale and healthy young marriages to look ahead to the anniversaries and find no dread in them.

Thank you for showing and teaching us to remember our Creator and to honor that which comes before us, before we ourselves grow old and stooped and the danger of finding no pleasure comes. For in doing so, we guard against losing our pleasure and joy.


Posted by Maria Reynolds Weir at 2:20 PM No comments:

A Panda Bear, A Priest and Mercy


While the panda tumbles in the washer and dryer at home, waiting for its perch on our church shelves, and its turn in the narrative of our lives, the lives of people who put us in Mexico, he says, “That was my kind of vacation, you know. We build. Sure, we work, but we get to see the people too.” And we did. We vacationed in a way that feeds my husband and me. We stood on the cold Tijuana beach. We bargained for futbol jerseys and a few gifts at the market. We watched fellow American tourists, mostly college students with their American buttcheeks hanging out of their doily-swim bottoms, wearing what they call “drug-rugs,” the hand-woven warm cover-ups perfect for the mild days and cool nights in Tijuana.  While there we and the team prayed morning and night, at the site, all the time. We prayed “Padre Nuestro, Que estas in los cielos, Sanctificado sea tu Nombre”—Our Father Who art in Heaven, Hallowed be thy name. And privately, we prayed, “Lord Have Mercy.” But on whom? Us, with our prejudices or the kids who gave us their best in exchange for a bit from us, a week, two rooms, dollar tree toys? 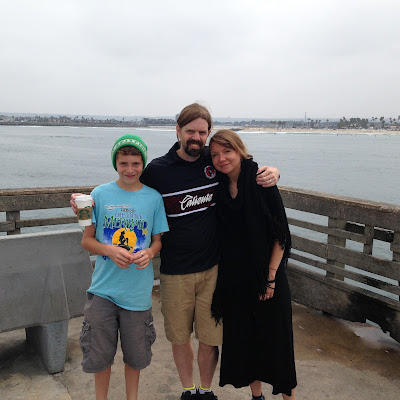 Posted by Maria Reynolds Weir at 6:39 PM No comments: