A Turtle, An Easter Egg, Resurrection and Death Questions 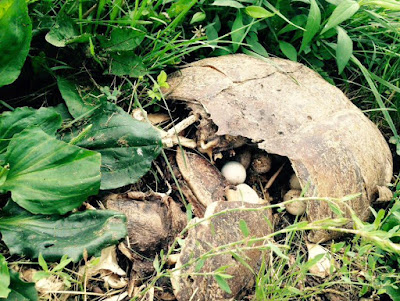 Cracked like an Easter egg, spilling out more eggs. Is this what death looks like? Like a snapping turtle, a venerable mother, head split, guts spilt and all her unborn progeny aborted, nesting arrested.

Or does death look more like what I used to think, like the Death Star laser imploding a planet entire. Black oblivion and silence perceived by someone most sensitive to the quiver of life.

I've been writing about death for over two years now. I cannot decide if death is sudden, as if energy is swallowed into a black hole. Matter neither lost nor gained, transformed from parents or children or friends into molecules. If so, are there souls or spirit flapping between? Are they the dark matter?. Is death the disembodying of souls? Is there a final anguish followed by silence? A song ended abruptly after the climax of timbre and cymbals? After the walls of sound, the track cuts. For the living, is there such a thing as silence? Something is always there humming.

Or, does death best resemble decay? Does it detach the living from the dead?. The corpse swells and rots revealing all symbiotic life it once sustained. It hints at its progeny, its DNA, what it did, where it went, what it might have been.

When my father-in-law was dying of pancreatic cancer, he saw work to be done until the last three or four weeks. Perhaps, he proposed, his church needed a strong man still, for the young fathers who never had one, the boys without, like his grandson. Perhaps, he still had a witness of the faithfulness of God to the nurses, the doctors, the men on the radiation ward. In the last few weeks he gave up such final tasks, it was enough just to breathe. When my uncle took interferon for the melanoma that peppered his white skin, like the moles on him, he too felt a great final purpose. He preached the gospel at all times, sometimes with words. For a few months, he came close to death first from gangrene, then in a car accident. Now he is cancer free. Three months before he died, my grandfather shuffled up to the Ambon of the Church of the Brethren, laid his great, shaky hands on my head and my husband's. Give them a great spiritual purpose, he prayed, until one lays the other into the arms of God.

When his wife died, C.S. Lewis did not believe himself any less married. My grandmother, my mother-in-law, both old widows never believed themselves unmarried. I have no such experience to relate; I'm not hurrying along my spouse's death. The closest experiences are my own losses. When my aunt died at fifty-one, I felt tethered to her. I hadn't visited with her in some years and I missed her terribly. Now I had the haunting memory of missing her for all time. Some songs, some scents, some color blends bring her back to me with force. I feel my Uncle John's presence in who I am. His faith formed my parents and, as a result, mine. When my brother-in-law died, I saw him for months driving around town in his van. Further in the recesses my grandfather's voice booms, he spits watermelon seeds and teaches me how to bounce the lawnmower deck to unstick the wet grass before it gums up and kills the engine.

"No man is an island," wrote John Donne, "every man's death diminishes me."  If there is such a thing as a disturbance in the force, it must be the sensation that part of me died.

Seeing those eggs, tucked inside that turtle, made me think of all that would not live, like all that stopped with the deaths of family members. Such purposes they might have fulfilled, had they had a few more days.

The older I get, the more I realize that I live in overlapping concentric circles of interdependence. Human lives sustain each other. But the habitat, all its beings sustain me too. They drink the same water, breathe the same car exhaust, muck around in the waste we all produce. They die under the crush of feet or wheels or by disease. Each one sustains another, purifies, feeds.

The mother turtle with the crushed head and the top of her broken open along her perfect eggs nesting within accosted me in such a sorrowful, violent way, She will decay. Her eggs will be stolen by raccoons. The promise of life will be unfulfilled. I used think of death as inevitable and natural. I mocked Dylan Thomas' idea that we should rage rage against it. Now, when I see how each death represents in an immeasurable loss of beauty and hope, I feel enraged, a little twinge at least. I know that the relinquishing of my life allows space for another. But death remains a conundrum. I will go on wondering if it is a void, a vacuum of what once was, or if death includes legacy, the progeny, the DNA, the lasting affect of one life passed on to another.
Posted by Maria Reynolds Weir at 5:23 PM No comments:

Why I don't have a Joel-ology

BAM! I'm really writing to persuade you to read another blog post! Be warned. "What Matters Most" swipes at "theology" as we conceive it.

As I read Fr. Stephen Freeman's piece, I realized that none of us would propose to create a systematic"-ology" about another person. I don't have a systematic Joel-ology for my husband, though I think I know him well. I don't have one for my parents, either of my children or my closest friends. We don't have president "so-and-so"-ology, or Kierkegaard-ology because we know that we cannot truly distill the essence of another person (we can't even agree on when personhood begins, for Pete's sake). We can know a person. That is how we know God.

Last night, while editing short essays for submission, I re-read a piece I'd written about knowing God through the bearing witness to a friend's stillborn son. I'd just listened to one by Cheryl Strayed from the Dear Sugar column collection Tiny Beautiful Things about a woman with a newborn on the brink of death. Both Cheryl and I said we could know Jesus (a mere person to her), who is Christ (a person and divinity to me) through being witnesses to His suffering, often through historical accounts as well as through others' suffering.  I worried a bit because I'd penned an almost identical denouement as Strayed. What would it mean that I, a believer, seemed to say something so similar to someone who says she believes Jesus is only a very admirable person?

I checked myself. Not a problem, I've concluded. It was His humanity that opened the door to our encounter with and "knowing" of Divinity. He is fully human. (Most heresies started by trying to dismiss this.) And, He is fully God.

So, if you are inclined, this short bit by Fr. Stephen Freeman is a good reminder that theology is not what we "think" about God but about knowing Him, the person of God, who knows us.

What Matters Most by Fr. Stephen Freeman
Posted by Maria Reynolds Weir at 6:17 AM No comments: